“St. George” Rotunda Church is the most ancient Christian temple in Sofia, located in the city centre. Constructed during the 4th century by Romans, this building is a large architectural complex of a cult that during the Middle Ages (9th – 14th c.) many times has been subjected to reconstructions connected predominantly with its central part – the rotunda. In antique Serdika and medieval Sredets (ancient names of Sofia) it was a Christian temple, devoted to St. Georgi, and in the 16th century it was transformed in a mosque by Turks. Although this temple has been stricken by time and as a result of negligence in the past, it has survived till nowadays and evokes well-deserved interest as a model of the ancient construction and Christian fine art.

The building is developed from the West to the East. 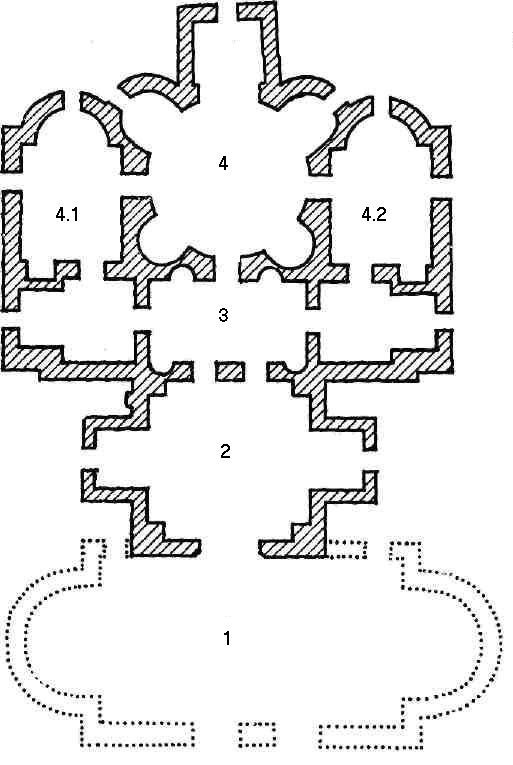 1. On the West it begins by a large entrance narthex ending to the North and to the South by semicircular abcides.
2. From the West to the East a cruciform vestibule follows. Four heavily built pilasters, constructed in the four corners of the inner almost square area, give a hint of a semi-cylindrical vaulted covering.
3. The third premise is a three-section entrance-hall connecting with a large spherical building – the rotunda.
4. The fourth part of the construction is the very “St. Georgi” Rotunda. Both side premises connected with it by vaulted entrances to the East end by abcides. This way, together with the Rotunda, they form a typical church with a nave and two aisles. In connection with the scenes of the New Testament, depicted over the entrances, the investigators conclude that the North nave has been a chapel devoted to the Suffering of Christ, and the South one – to the Assumption.

The Rotunda is a cylindrical domed building, constructed on a square base. The upper part is formed as a cylindrical body, pierced by eight cylindrical windows. It is approximately 9.50 m wide (in diametre) and approximately 14 m high. In the overall architectural composition the Rotunda has been the highest and most imposing monumental dominant. The interior space is realized by simplicity and stoutness of forms and volumes. The square altar premise, the four symmetrically located niches, the main entrance in the west wall and the several protracted windows enhance the impression of space stoutness.

The semi-circular niches are formed diagonally and symmetrically. The east niches are larger than the west ones, but the latter are higher. The east niches’ form overtops the semicircle and is horseshoe-shaped. A semicircle pool with a radius of 1,40 m is built in each of them. The bottom of the little pool is 50 cm lower than the floor and its upper part is 50 cm higher than the floor. The floor of the Rotunda has been built on posts, forming the so-called hypocaust.

The hypocaust system consists of little rectangular posts, constructed by almost square bricks (size: 20 x 30 cm) and 1.35 m deep beneath the floor base, stepping directly on the ground and set at a distance of 0.5 to 1 m; they were connected at the upper side and formed parallel arcades. The hypocaust is a ventilation system, constructed because of the intense subsoil dampness.